It was Mum’s idea to do this one! She mentioned the year before she thought she had “one more in her” before she turned 65.

But her knees are stuffed (too much athlete-ing over the years haha) so her only option was the 70km kayak leg through the mighty Waimakariri Gorge ( because that’s for the faint-hearted). This was going to be her ninth traverse over the South Island – I had done a team event with her back in 2007 and ran over the beast of a mountain in the separate race in 2019 so I was absolutely down with her notching a final one up. Then we needed a third person to do the bike legs (I was going to do the mountain run) and it seemed fitting to ask my big brother AJ to do it! He said yes and Team Kane (aka The Kane Train) entered.

I buggered up my achilles training in the build up so the decision was made three months out that I would do the bike legs and AJ would do the mountain run. I didn’t particularly enjoy bike training but it was another mental barrier I had to push through which when I look back at it – I know it made me that little bit tougher. AJ was loving running but did get a bit of a dodgy knee, and Mum – well she was training hard but was starting to realise that what she had to do was not going to be easy, and she was starting to doubt herself. So what a dream team! But I tell you, just BEING involved in the Coast to Coast is an achievement. The logistics/planning/execution is full noise. You imagine 1000 athletes and their support crews traipsing over to the West Coast en masse and then having to get from point A to point B to C and D and E and all that’s in between until you get to New Brighton beach on the East Coast. I often joke that getting there as a support crew is just as tiring!

You imagine 1000 athletes and their support crew traipsing over to the West Coast en masse and then having to get from point A to point B to C until you get to New Brighton beach on the East Coast.

On the second day, Mum had a terribly tough day on the river (a handful of swims), but that gutsy, stubborn and incredibly strong legend of an athlete hauled herself to the finish of the kayak to tag me for the final bike leg. She said through tears: “I had to finish because I knew you were waiting and had your nice cycle outfit on!” What a bloody legend.

It was a very special, emotional moment running up that finishing chute with Mum and AJ (with Dad cheering on) – to complete the 2020 Coast to Coast in a family team. 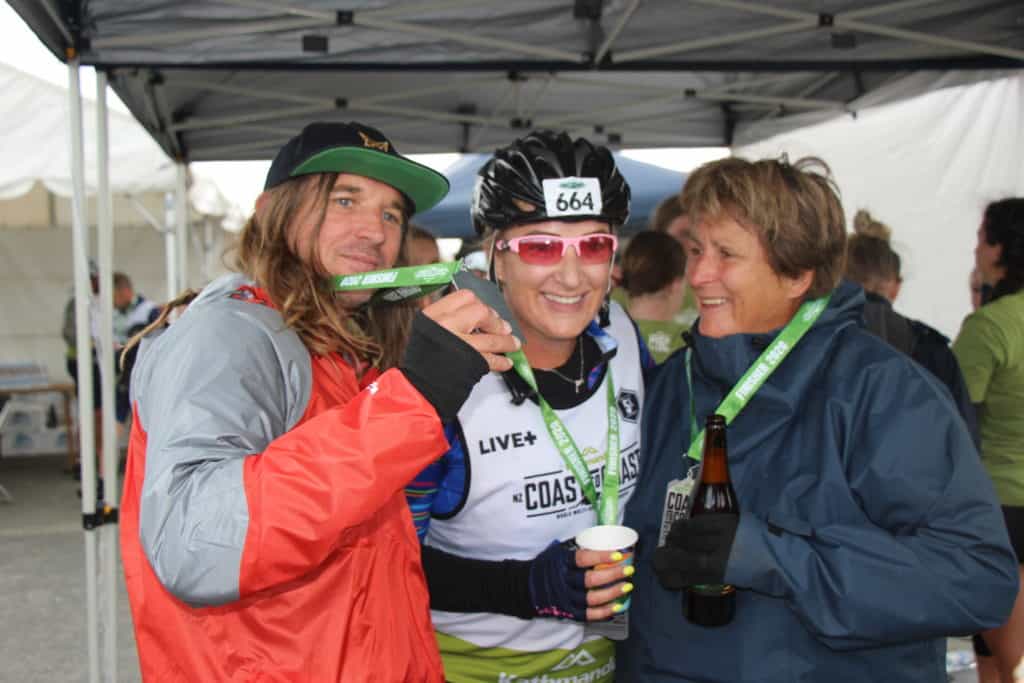 I have now completed every leg – just not altogether…so that will absolutely be happening one day soon.

There’s something about the event that’s so addictive. You are at the mercy of mother nature, some obscenely treacherous terrain, you have moments when you cry, moments where you’re absolutely freezing, moments you’re biking up yet another relentless hill, moments where you packed the wrong gear, moments where you snap at your support crew – but you get to the finish and you’re already excited about doing it again. And that’s because you’ve just spent two days on a mad, ridiculous journey surrounded by the most amazing competitors, support-crews, organisers and volunteers. Coast to Coast runs like no other.